without looking at you

Franck André Jamme has published numerous volumes of both lyric and concrete poetry as well as collaborative works with contemporary artists, such as Jaume Plensa, James Brown, Olivier Debré, and Suzan Frecon. He was awarded the 2005 Grand Prix de Poésie de la Société des Gens de Lettres, and is the editor of the Pléiade edition of the complete works of René Char. He is also a specialist in contemporary Indian Tantric, Brut, and tribal arts, and has curated exhibitions in Paris, San Francisco, and New York at venues including the Centre Pompidou and the Drawing Center. Siglio Press published his Tantric Song in 2012 (trans. Michael Tweed), and his books translated into English include Moon Wood (trans. David Kelley, Selavy Press, 2000), The Life of a Beetle (trans. Michael Tweed, Black Square, 2000), The Recitation of Forgetting (trans. John Ashbury, Black Square, 2003), Another Silent Attack (trans. Michael Tweed, Black Square/Brooklyn Rail, 2006), and New Exercises (trans. Charles Borkhuis, Wave Books, 2008). He is also the translator of John Ashbury's Three Poems into French, published by Al Dante in 2010. He divides his time between Paris and Burgundy.

Norma Cole, born and raised in Canada, has been involved with contemporary French poetry since the late 60s. She has translated books by Anne Portugal, Danielle Collobert, Fouad Gabriel Naffah, and Emmanuel Hocquard, as well as a volume of critical work, Crosscut Universe (Burning Deck, 2000) and a book of interviews with Jean Daive. Cole has also published over ten volumes of poetry, including a selected, Where Shadows Will (City Lights, 2009), and a volume of critical essays, To Be At Music (Omnidawn 2010). Her most recent collection is Win These Posters and Unrelated Prizes Inside (Omnidawn 2012). Also a visual artist, she lives and works in San Francisco. 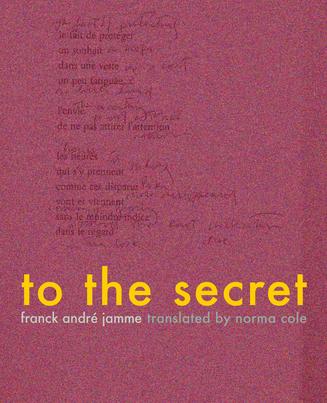 "They gave me precise instructions: compose for twelve whisperers twelve series of four lists. When

all was finished: a sense of giddiness, a waltz. A kind of music. Or a vast park filled with large florescent green parrots and incredibly fragrant flowers . . .”
—F. A. Jamme​