One of France’s most important post-‘68 poets, Claude Royet-Journoud developed a spare style that interrogates language through distillation, taking poetry beyond image and metaphor. His tetralogy, comprised of Le Renversement, La Notion d’obstacle, Les Objects contiennent l’infini, and Les Natures indivisible, all published by Gallimard between 1972 and 1997, is now a classic in the long tradition of French poetic innovation going back to François Villon. Royet-Journoud’s work has been translated into nineteen languages and has received many grants and awards, including the 2000 Grand Prix de Poésie de la Ville de Paris. In Theory of Prepositions, his first book-length work since the tetralogy, Royet-Journoud charges the interstices of language with a vivid and compassionate force as he continues to explore the implications of the page-as-stage for a poetics of immanence. 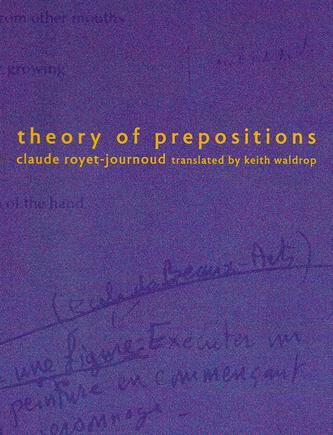