An aphoristic complement to Royet-Journoud’s 2006 La Presse book Theory of Prepositions, this collection of poetic declarations and explorations manages to be simultaneously provocative and contemplative. His evocation of the preposition is not without homage to Louis Zukofsky, a poet central to Royet-Journoud’s work; they share a deep affinity for the particular, and beyond that, for the actual particulars that compose our days, and for the delicate tissue that binds them:  “ . . . in the very articulation, sense becomes magnetic.” Here the poetics of one of the most important French poets of the late 20th/early 21st centuries is articulated—lucidly and luminously. In short, he sheds light on the subject. 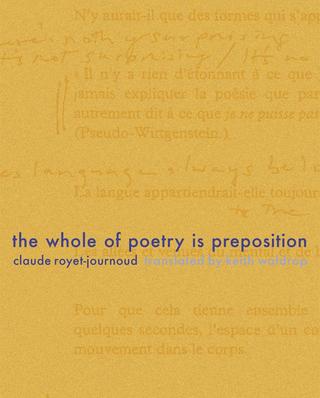