Oscarine Bosquetwas born in Marseille in 1964, and is the author of Participe Présent (Le Bleu de Ciel, 2008) and Chromo (Éditions Fourbis, 1996). She teaches at the art school of Brest in Britanny. Sections of this book have appeared in The Poetry Project Newsletter and Chain; previous poems have appeared in English translation by Michael Palmer in Raddle Moon, and a translation of her chapbook Mum is Down was published by Post-Apollo Press in 2014.

Oscarine Bosquet’s Present Participle is a book-length living verb that constitutes a call to action through language, and from all angles—from the way we listen to the way we shape our letters. In a dozen taut sequences, the book explores metaphorical and actual prisons and revolutions through references to political captivity, torture, and despotism as well as philosophical heroism through nuanced and striking phrasing. The writing reflects the sufferings of the distanced, whether physically, psychically, or emotionally, and pays particular tribute to the political leader and prisoner Rosa Luxembourg. Fragmentation, echo, and repetition construct a haunting verbal landscape that haunts, above all, itself. 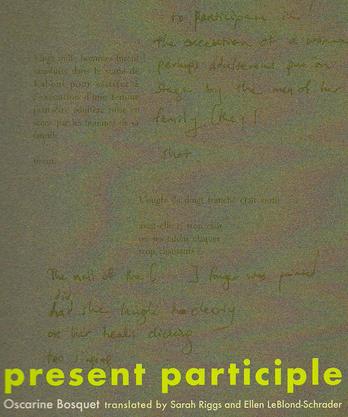